For the love of Israel, we need to say: The Reform Movement is Zionist 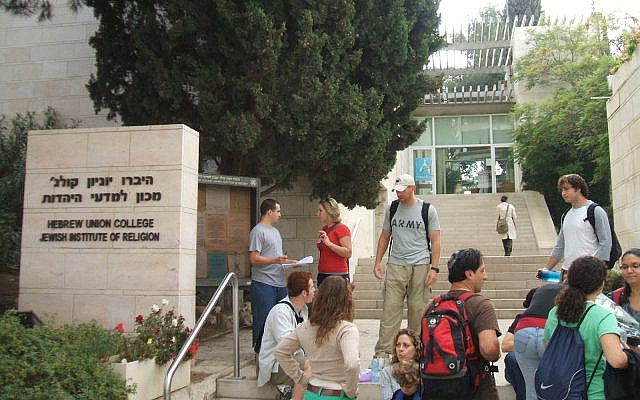 How could future Jewish leaders write an open, public letter in the middle of a war, missiles raining down on our people, without ever mentioning Hamas?

The New York Times Magazine recently published a long article entitled “Inside The Unraveling of American Zionism.” The piece focused on 93 rabbinical and cantorial students enrolled in multiple non-Orthodox American seminaries who published a letter during the May hostilities between Israel and Hamas, harshly criticizing Israeli policies and actions. While the majority of students at our Reform seminary, the Hebrew Union College-Jewish Institute of Religion, did not sign the letter, fully 30 of our seminarians did.

Out of deep respect for the need to provide as much safe space for students to explore and express whatever is on their minds, I am reluctant to comment publicly on anything students say, even if they, themselves, want their views in the public domain. Students are in training and do not yet have the standing or responsibilities that leaders of the Jewish community bear. However, once The New York Times published an in-depth analysis that the students seemingly encouraged, the issue was no longer one of internal debate within the classrooms and clergy networks of our movement. The matter became one of public record both within the broad Jewish community, and the public at large.

Under these circumstances, it seems to me that we have a responsibility, even an obligation, to respond. The Reform seminarians identified themselves as students of the Hebrew Union College-Jewish Institute of Religion (HUC-JIR). The HUC-JIR even permitted The New York Times to take photos in the sanctuary of the New York campus for the story. We have a communal responsibility to clarify what it is that the Reform movement believes. What are our values and principles?

For the record, the Reform movement is a Zionist movement. Every single branch of our movement – the synagogue arm (Union for Reform Judaism), the rabbinic union (Central Conference of American Rabbis), and our seminary (HUC-JIR) – every organization separately, and all together, are Zionist and committed ideologically and theologically to Israel.

We are theologically committed to the centrality of the Jewish people and the Jewish state. We have said so repeatedly. We have obligations to fellow Jews. We are commanded to be ohavei Yisrael, to love fellow Jews – and to support them, especially in times of war, hardship and struggle. We have a right, and an obligation, to teach future leaders our values and commitments. We have a right to insist that some values and beliefs held by some American Jews are inconsistent with our beliefs. The student letter calls for a rethinking of American Jewish education about Israel. Fair enough; but our movement has a right to encourage some American Jewish seminary students to rethink their approach to ahavat Yisrael.

Jewish leaders have an obligation to speak about Jewish peoplehood and our struggle to survive. Jews want to live. Why is that so hard to speak about? Why is it so hard to speak about the war crimes inflicted on our people, and the blood-curdling threats to commit another genocide? What higher responsibility does a Jewish leader have than to love and protect fellow Jews? Are we so emotionally distanced from our own people that we cannot even bring ourselves to condemn war crimes against Jews in the middle of a war?

The issue is not criticism of Israel. We need critics.
How is it possible for future Jewish leaders to write an open letter to the public in the middle of a war, missiles raining down on our people, without ever mentioning Hamas, the instigator of the war? How is it possible to write of “tears that flow” without weeping for our own brothers and sisters, killed, maimed and scrambling to underground shelters at all hours of the day and night?

I honor and respect all those who are troubled by the moral ramifications resulting from the unresolved Israel-Palestinian dispute. I am troubled, too. It is right to point out that military force must be employed in accordance with the laws of war – and when there are violations – offenders should be held accountable. But no one should have any illusions: The war initiated by Hamas was a terrorist war, perpetrated by a terrorist organization. Hamas believes that no form, act, or means of Palestinian resistance is terror. All Israelis are soldiers. All Palestine is occupied. All means are legitimate.

The strategy of Israel’s opponents is to minimize threats against Israel because that allows them to delegitimize Israel’s response to defend its people. They seek to deprive Israel of the right to self-defense. They argue that terrorists are not really terrorists; they are freedom fighters; that the threat is not really a threat; that Israel has all the power; that Israel employs disproportional force. Israel’s opponents know what they are doing. Some American Jews, wittingly or not, provide Jewish cover to forces that seek not coexistence with Israel, but Israel’s destruction.

The issue is not criticism of Israel. We need critics. Many of our debates are both healthy and necessary. The issue is that the Reform movement does not speak enough about our people’s enemies or their threats against us. We have enemies who seek to destroy us three generations after the Holocaust. That is the root cause of the unresolved conflict: The inability or unwillingness of Israel’s enemies to accept a Jewish state within any borders.

Where you sit often determines where you stand on an issue. If you are sitting in a lecture hall on an American campus or seminary, you might come to view the Israel-Palestinian dispute differently than parents of three children who are spending the night in shelters five miles from Gaza. If you are sitting in an American seminary or university, you might come to view the conflict as a racial one, or one of oppression, patriarchy, or colonialism, as so many students nowadays view every social problem. Thus, the seminary students wrote, “So many [American Jewish] institutions are silent when…racist violence erupts in Israel and Palestine” – as opposed to vocal American Jewish leadership in reckoning with racial violence in our country.

It is preposterous to imply that American racial problems have anything to do with Israel’s struggle with Hamas: That Israel fought Hamas because Israelis are white and Gazans are people of color, and Hamas is simply a civil rights organization that is being discriminated against. First, most Israeli Jews are not of European descent. They are Jews of color. And second, can anyone seriously argue that Hamas launched 4,000 missiles, every one of which was a war crime, because indigenous people of color rebelled against white colonial Jews whose sole purpose is to exploit and oppress?

Most Israelis and most Palestinians want what most people worldwide want – dignity, a decent job so that they can provide for their families, and they want peace. Palestinians do not want Israeli soldiers in their lives, and Israelis do not want to send their children to fight wars. Both peoples have an indisputable claim to the land.

But we need to be aware of the effort by Israel’s opponents to portray the Palestinians exclusively as victims, because if you are a victim, you feel no need to be morally accountable.

By Ammiel Hirsch, published by the Times of Israel